Lagos is one of the most beautiful towns along the Algarve coast, the modern name Lagos derives from the Roman “Lacobriga”. It is located at 267km from Lisbon, 87km from Faro international airport, which can be reached by car in about 50 minutes and 126km from the Spanish border (Vila Real do Santo Antonio). Lagos was a major victim of the 1755 earth-quake and the huge tidal wave which followed it, destroying much of the town in the process. 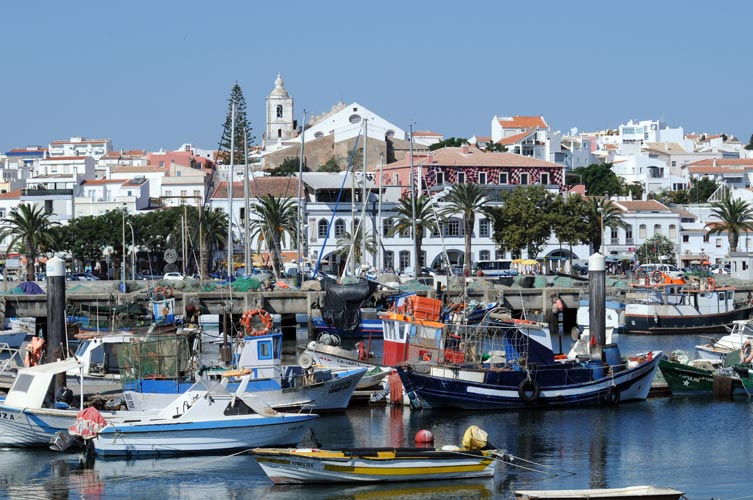 The marina of lagos with a view of the fish market

Today it boasts an elegant harbour with restaurants and boutiques lining the quayside area. But, despite many changes, the old town’s character has been preserved to make this city a meeting place of Portuguese history and modern tourism.

Lagos was already frequented by the Phoenicians, Carthaginians, Romans and Moors and all of them left their mark and influence. Portugal owes its great era to the deeds of bold captains – it was from there that they went to sea, because it was from here that once the father of maritime discoveries ruled: Prince Henry the Seafarer. It was the men of Lagos who built the frail boats which Prince Henry the Navigator sent out to probe the realms of the African coast. Although the Prince established a famous naval school and observation point at Sagres, on the south-western tip of the peninsular it was Lagos which was become the centre of maritime activity. And it was Lagos which became the centre of this new-found wealth. In those days there was no trade more lucrative than the slave trade and Europe’s first slave market still stands here today, except it is now an art gallery where local artists exhibit their wares.

Some of the best beaches are near Lagos, including “Dona Ana” the most appealing. The coast behind the old port to the south-west of Lagos is called Costa d’ Ouro (Gold Coast), because of the colourful cliffs, one of the features that make Lagos such a special place of visit. Reddish sandstone, formed by wind and weather to droll rock points, grottos, portals and shafts – that is the famous “Ponta da Piedade”, here the water is so transparent that it is possible to make out the outlines of the submerged rocks. The municipality’s breathtaking landscapes are an open invitation to enjoy long pleasant walks, boat rides along the coast or to discover the various beaches, such as “Praia do Pinhão”, “Praia do Camilo”, “Praia Carnavial”, “Praia Dona Ana”, „Praia Porto de Mós“ west of Lagos and the 4km long sandy beach „Meia Praia“ east of Lagos.

The town centre of Lagos, occupying the best spot along the riverfront, has remained unspoiled and has retained its charm. Visitors to the city are drawn by the attractive monuments and cafés which occupy the heart of the old town. In recent years, parts of the town have been converted into a pedestrian precinct, making it more pleasurable for strollers.