The Algarve is, from time immemorial, a region rich in history and immense natural beauty. There is a bevy of landmarks and sights to discover, for all those who are interested in the region. Here you’ll find some places of the Algarve that you can not miss the opportunity to visit:

Sagres – the longing of the seafarers

The Sagres peninsula stretches 7 km into the sea. Here it was, on the most south-westerly point of mainland Europe, that at the beginning of the 15th century, Prince Henry the Seafarer developed plans to free this land from the claws of Spain. Within a few decades he revolutionised navigation through the astrolabe and quadrant. He also has the pioneering ship type “caravel” developed. It was with her that his captains discovered Madeira and the Azores, the west coast of Africa, India, Brazil, Australia… The fortress “Fortaleza de Sagres”, built by the prince, was destroyed by the earthquake in 1755. In 1793 a new one was constructed at the strategically important point. Inside of the fortress the visitor can take a walk around the wide open spaces. There are some of the original buildings remaining and some new ones, which provide a modern information centre about the history of the fortress and an exhibition of historical navigation instruments, maps, etc. One of the main attractions is the wind compass, also known as the Wind Rose, a vast circle with radiating points, 43m in diameter and divided in 42 segments, which is marked out in stone on the ground and possibly dating back to the 15th century. The exact purpose of this design is still unclear today, as it does not correspond to a sundial or the points of a compass. Within sight is the hermitage of “Fortaleza do Beliche”, one of the most charming buildings of the Algarve The tiny stone fortress, reconstructed in 1632, perches dramatically on the cliffs and the sea crashes against the rocks below. It is the best place to lunch and it is also a hotel with four simple but attractively furnished rooms.

The region of Sagres is breathtaking and provides with unparalleled scenery, a coastline characterised by high and brutally imposing cliffs and sheltered sandy coves. There are many beaches around the Sagres peninsula. The best beaches for windsurfing, such as Praia da Baleeira and Praia da Martinhal, are located west of town.

The Cabo São Vicente or Cape Saint Vincent, so named after a Spanish priest martyred at the beginning of the 4th century, is the westernmost point in mainland Europe. It was known to the ancient seafarers as O Fim do Mundo (the end of the world) and a reference point in sea routes between 13th and 16th century. A wild and windswept place where rare birds and eagles soar, it is not hard to understand why it’s rugged cliffs where once thought to mark the end of the known world. On it set within the remaining buildings of a 17th century Franciscan convent, stands Europe’s second most powerful lighthouse, keeping vigil over of the busiest shipping lanes in Europe and the scene of many significant battles in maritime history. Sometimes its light can be visible from a distance of 50 miles. Cape Saint Vincent is of interest to naturalists and tourists alike, the former because of the several plant species that can be found there and the latter because of the neighbouring beaches, which are also beautiful and far away from the ‘madding crowd’. The spectacular views from Cape Saint Vincent are a real attraction where the Portuguese coast takes a 90° turn from North-South to West-East and are only matched by the views from the mythical Sagres headland, a veneration spot and a retreat that dates back centuries. The most magical time of day to visit the Cape is sunset, when the colours are amazing.

The West Coast - the last wild coastline in Europe

A hundred kilometres of beaches, estuaries, cliffs and rocky small islands that is unique in Europe due to its beauty and natural richness. From Sines (north), to Cape Saint Vincent (south), embracing part of the Alentejo coast and the most western part of the Algarve, this landscape is integrated in one of the most beautiful Portuguese protected areas: the Southwest Alentejo and Vicentine Coast Natural Park.

The southern part of this coastline that is located in the Algarve, between Odeceixe, Aljezur and Cape Saint Vincent, deserves a special highlight due to its singular beauty. Along this unique coastline the beaches are interrupted with rocky cliff areas. When you cross Alentejo to the Algarve the beautiful OdeceixeBeach is famous for its tall cliffs and its twisted path of the “Ceixe” stream. Further south are this coast’s last long beaches: Amoreira, Monte Clérigo, Arrifana (neighbouring Aljezur), Bordeira and Amado. Each beach has its charm: at Amoreira flows the Aljezur stream among dunes and rocks. Arrifana is a charming beach set among tall cliffs with a vast rocky mountain to the south. Bordeira has an impressive chain of dunes to the north and a long beach to the south. Amado – a fisherman, surfers and nature lovers’ paradise – is enchanted due to its tranquillity and bright light. Then the landscape is all tall cliffs falling abruptly onto the sea and only near Cape Saint Vincent you find again sandy beaches. The beaches near Vila do Bispo are extra ordinary starting north of Barriga and further down through Cordoama and Castelejo. The access is step although the view is worthwhile: wild, cold but invigorating ocean with beaches that have soft slopes until the seashore.

All these beaches have terraces, fishermen’s restaurants and cafes with no exception where you may always savour grilled sea bream or local seafood. 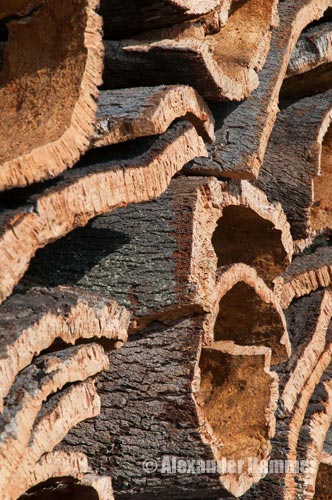 The Serra de Monchique – the green oasis of the Algarve

The Serra de Monchique is an all year round green and wooded mountain range of eucalyptus, cork and chestnut trees that acts as the natural northern boundary for the Algarve. It’s an interaction of light and shadow in an intact nature, where many springs and brooks gush. The coastal mountain range which reaches an altitude of over 900 meters provides Portugal’s southern-most province with an unparalleled climate, with 300 sunny days a year and where the cool winds from the north are cut off. The mountain peak of Fóia is the highest point of the Algarve and on clear days is worthwhile for the views. The view summit extends over almost the whole western Algarve, from Faro to Cape St. Vincent. In the Serra there are many tiny villages where life seems to have stood still. Often the farmers still use methods introduced by the Moors. Honey is spun, “Medronho Schnaps” is distilled from the fruit of the strawberry trees, and cork is peeled from the trees. Many paths lead through this wild but beautiful countryside, and there are also guided hikes from Monchique, where the main attractions are the church with a Manuel-style “knotted door” and a Franciscan monastery.

Don’t miss the opportunity to visit Caldas de Monchique. Caldas simply means spa. Nestling in a steep wooded valley the quiet little spa of Caldas de Monchique is the antithesis of the Algarve’s brash seaside resorts. It has been used since Roman times and in the 19th century Caldas became a favourite of the Spanish and Portuguese bourgeoisie. The spa gushes out approximately 20 million litres of water per year, which emerges at a temperature of around 32 degrees centigrade. Visitors can taste the waters for free and below the tasting area is the thermal hospital where visitors come for treatment of rheumatism and respiratory illness, among other ailments.

Silves - the former capital of the Algarve

Rising up on a hill on the edge of the Monchique Mountains, Silves is on the northern bank of the Arade River, the main cause of both the city’s moments of splendour and its decline.
Silves is described by the 12th century geographers as sumptuous and composing and compared in grandeurs with cities like Lisbon, Seville and Cordoba. And it was during the Arab occupation that Silves became an important economic, social and above all cultural centre, becoming justifiably known as “the cradle of Arab-Andalusia poetry”.
In Silves it is possible to witness a very rich cultural past with memories preserved that are not eroded by time and that enrich the present. The principal monuments of the city date from the period of the Arab occupation, outstanding among which is the castle, an important military fortification, one of the most beautiful and well preserved of the country, and the Almóada cistern and well, unique in the world, which is located in the Municipal Archaeological Museum. It was due to D. Sancho I, King of Portugal and the Algarve, that Silves was taken from the Moors in the 12th century, after a siege of one and a half months during which the son of D. Afonso Henriques (the first King of Portugal) put into practise a cunning plan to cut off the water supply from the besieged Muslim troops. It is this feat, the reconquest of Xelb, then capital of the Moorish kingdom, that is commemorated by the statue of the monarch in Silves castle.

The customs and habits of the past can still be observed in the crafts of weaving and basket-work carried out by people in the parish and which keep the olds kills and traditions alive. To recapture the great tradition of the cork industry, you can visit the Cork Museum inside the “Fábrica do Inglês” (Factory of the Englishman). It is a very welcoming place which hosts shows and different types of entertainment throughout the year. Events are organised all year round, representing all the different forms of artistic expression. There are exhibitions and concerts, fairs and historical walks. During the summer months, shows take place in the open air, with the city and its monuments as a backdrop. In the hills around Silves, there are excellent opportunities for exploring the countryside on foot, by bicycle or in off-road vehicles. The “Centro Cinegético” is a pleasant place in which to see animals and be close to nature. And on the River Arade, there are opportunities for activities such as rowing and canoeing.