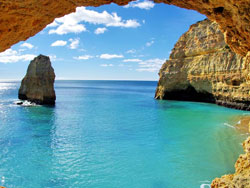 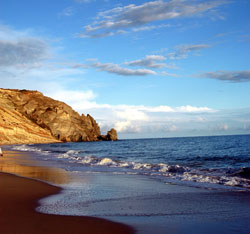 The country & the people

In Portugal, there are great contrasts in the climate. The north-south climate boundary runs through the country, roughly in line with the River Tagus. The further south you go, the hotter and drier it gets, and the less often it rains. The north, on the other hand, is subject to the Atlantic influence. North of the Tagus line, it gets cooler and wetter, and the landscape is mostly green. Strong, fresh winds blow all over the west coast, bringing with them cold nights in particular. On the Algarve coast, on the other hand, even in the winter months, air and water temperatures are up to 16°C and an average 5 to 6 hours of sunshine is enjoyed per day. Thanks to the long, hot summer and the mild wintertime, you can swim in the Algarve practically all year round.

Lisbon – the capital of Portugal

The Portela de Sacavém Airport is around 7 km from the city centre and can be easily reached by taxi or bus.

The centre of the city is the flat "Baixa" (lower town), built in the 18th century. East of the Baixa lies the oldest quarter of the city, Alfama. West of the city is the "Bairro Alto" (Upper Town) with its countless pubs. Lisbon is a city full of contrasts, where old and new meet at every step, and throughout the city you will find parks, gardens and viewpoints from which you can enjoy beautiful views.

In Portugal, time lags behind Central and Southern Europe by one hour, in other words clocks are set to Greenwich Mean Time (GMT) as in the UK. The change to summer and winter time occurs at the same moment as in the other countries of the European Union.

Around 180 million people speak Portuguese worldwide, but only about 10 million live in Portugal. Most, about 155 million, are Brazilians who have adopted the language of their colonisers. In addition, there are the inhabitants of the former colonies of Angola, Mozambique, Guinea-Bissau, São Tomé and Príncipe and the Cape Verde Islands, as well as several million naturalised Portuguese. Portuguese is the fifth most spoken language in the world. Portuguese, like Spanish, French and Italian, belongs to the Romance language family. Vocabulary and grammar are predominantly derived from Latin. But some words have also entered Portuguese from the Arabian period, often recognisable by the prefix "al", as in Algarve, from "al-gharb" (the west).

The Portuguese and football

The best-known domestic clubs are Benfica and Sporting, both in Lisbon, and FC Porto, and if one were to experience the most secret dreams of a Portuguese person, one would probably see him storming the pitch in his football club's jersey, towards the rival's goal, listening to the leaping crowd in the stadium cheering "golo, golo!" (Goal!). Oh, to be like Eusébio, who died in January 2014, the national football hero! It was he who ensured that a Portuguese team won a medal on international turf for the first time, when Portugal took third place at the 1966 World Cup in England. A bronze statue in front of the stadium of his football club, Benfica, reminds people of the "Black Panther" Eusébio.

Of course, Portugal currently also has a national football hero: Cristiano Ronaldo, also called CR7, is highly praised by the Portuguese, but he sometimes also has to endure strong international criticism.

"Olá, estás boa?" or, in the case of a male counterpart, "Estás bom?" is the usual greeting among friends and acquaintances. A "hello", really, connected to a question about personal well-being. In the same breath, one bends over to exchange a fleeting "beijinho", the kiss on the cheek. As a rule, there are two: one left, one right. It is not necessary to have a close acquaintance in order to kiss each other on the cheeks; it is sufficient to be introduced by a friend or good acquaintance into a circle of friends. However, "beijinhos" are only exchanged between women or between men and women, never between men. Men who are friends greet each other with a light slap on the shoulder or an "abraço" (hug), beating each other’s backs vigorously. If you don’t know the other person, or only fleetingly, a handshake or simple nod will suffice.

With two "beijinhos", good wishes and the hope for a speedy reunion, we take our leave: "Adeus!" (Bye) or "Até logo!" (See you soon), for which, however, no time limit has to be set. Not even "Até amanhã!" (See you tomorrow) is to be understood in the sense of a firm agreement for the following day.

Portuguese cuisine is hearty and tasty. Indispensable ingredients are garlic, olive oil, parsley and numerous spices. These include the fiery "piri-piri", a kind of cayenne pepper, with nutmeg and cilantro. From sugar, eggs, almonds and cinnamon, the Portuguese conjure the most incredible calorie bombs, such as "Doce de ovos".

The Portuguese are downright enthusiastic eaters, and they like to take their time over a meal. Breakfast (pequeno almoço) is lean - a croissant and a coffee drunk standing - but there are two lavish main meals, the "almoço" (between 1 and 3 pm) and the "jantar" (around 9 pm). "Petiscos" (savoury appetisers), like "Azeitonas" (olives), "queijo fresco" (cream cheese), "paté de sardinha" (sardine pate), "pastéis de bacalhau" (fish croquettes), etc. are available in abundant variety. This is followed by the indispensable "sopa" (soup) and the main course - meat, fish, or fish stew ("caldeirada de peixe"), with something sweet to round things off, and finally fruit. Plenty of bread, water and wine are also included at all times. The final conclusion of the meal is the "bica" (espresso), also in combination with a liqueur ("bagaço," “medronho ") or a brandy ("aguardente").